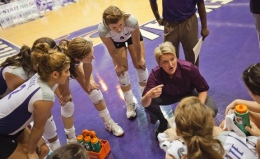 MANHATTAN, Kan. – The Kansas State Wildcats stumbled out of the gates against their in-state rival Kansas Jayhawks, but responded to notch their 20th win of the season and solidify their chances for an at-large bid to the NCAA Tournament. K-State got the victory 19-25, 25-18, 26-24, 28-26 to beat the Jayhawks to close the regular season.

K-State (20-10, 9-7) currently stands in fourth place in the Big 12 Conference but must await matches this weekend to see where the Wildcats will be in the end. Oklahoma can tie the Wildcats for fourth if the Sooners can upset the No. 6 Texas Longhorns on their home floor.

It was a career night for sophomore outside hitter Lilla Porubek as she pounded out 26 kills in the win. She surpassed her previous best of 23, which she set in five sets against Oklahoma on Nov. 9. Porubek took control of the match early and came up with kills at crucial times for the Wildcats. She said it was similar to the Oklahoma win as setter Caitlyn Donahue continued to feed her the ball as she had the hot hand.

“I found a good rhythm with Donnie,” Porubek said. “I guess it was the second part of ‘Feed the Bear.’ When I’m in the front row, I know I’m going to get the when it gets tight, and I knew I had to finish it. I’m glad she has trust in me to keep pushing me the ball.”

Porubek was not alone in having a strong performance as Kaitlynn Pelger posted another double-double with 15 kills and a team-high 19 digs. Donahue had her 14th double-double of the year with 49 assists and 15 digs. Courtney Traxson was solid for the Wildcats tallying seven kills on 29 swings with just one error. Middle blocker Alex Muff had six kills and six blocks to make her presence felt as well.

Kansas (14-14, 2-13) took the first set from the Wildcats as the Jayhawks’ star player Allison Mayfield fired off six kills to open the match. The Jayhawks hit .317 in the opening frame to jump on K-State quickly with the Wildcats struggling to find its rhythm hitting just .159.

From there the Wildcats would respond with a strong victory in the second set as Porubek saw eight of her kills find the floor during that set alone. K-State pounded out 18 kills for the win to even the match heading into the break.

The rivals would battle in two exciting sets to close the match, especially in the fourth with KU fighting off a match point to tie it at 24 apiece. K-State would then fight off two set points for Kansas and eventually score three straight points for the victory with Porubek providing the final kill.

“I didn’t think it was pretty,” said K-State Head Coach Suzie Fritz. “They apparently have something inside them with their backs against the wall. I feel the difference, ultimately, was the serve and pass game. We were better in that area and we were able to stay in system more often. Kansas is a good team.

“Lilla stayed patient and was taking what they were giving her. She was being creative and finding ways to get kills. I don’t think we win if she doesn’t have that kind of a match tonight.”

K-State now waits to see if it will get an at-large bid to the NCAA Tournament on Sunday. With the No. 27 RPI in the nation and 20 wins, Fritz said she is confident her team will get into the postseason for the first time since 2008. The NCAA Tournament Selection Show airs at 5 p.m. on ESPNU.