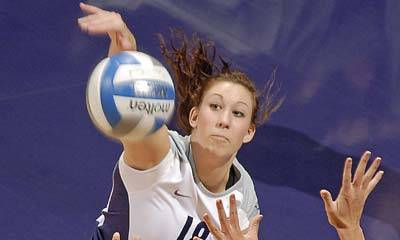 Down but not out, the K-State volleyball team would not die as they rallied past #25 Oklahoma in five sets on Wednesday night at Ahearn Fieldhouse, 18-25, 25-23, 16-25, 25-21, and 15-12.  The Cats earned their first win over a ranked team in two years.  They trailed the Sooners 20-16 in the fourth set before scoring nine of the next ten points to force the fifth.  K-State was led by a career high 23 kills from Lilla Porubek, and Kathleen Ludwig and Courtney Traxson each added 12.  The Big 12’s top offensive Kaitlin Pelger injured her ankle on Saturday against Texas A&M and was only used to serve and play in the back row.

K-State will travel to Texas on Saturday afternoon for 4:00pm first serve at Gregory Gymnasium.  Coverage on 1350 KMAN.com will begin at 3:30 in Austin.