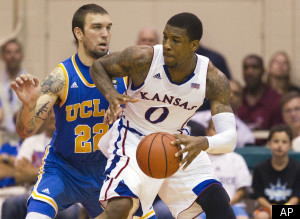 LAHAINA, Hawaii (AP)   Elijah Johnson scored 23 points and No. 14 Kansas nearly blew all of a 20-point lead before pulling away for a 72-56 win over UCLA in the semifinals of the Maui Invitational on Tuesday night.   Thomas Robinson had 15 points and 10 rebounds, Tyshawn Taylor added 13 points and six assists and Kansas reached Wednesday night’s championship game against No. 6 Duke, undefeated in the Maui Invitational while winning four titles.

Kansas (3-1) looked as though it was going to run away from the Bruins at the start, going up 12 points in the first 6 minutes and building from there.  The Jayhawks fizzled with a flurry of turnovers and defensive breakdowns to let UCLA back in it, then pulled away over the final 5 minutes for a harder-than-expected victory.  UCLA (1-3) got off to a brutal start and rallied to trim a 20-point lead down to five before running out of steam.