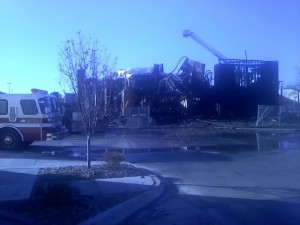 The Manhattan Fire Department responded to the call at 4th and Leavenworth shortly after 2:30 a.m. and would spend the next seven hours dousing the fire. By the time the blazes were under control, the fire had consumed the entire northeastern portion of the building.

Battalion chief Jim Blanck does not believe foul play was involved but at this point the cause of the fire remains undetermined.

No injuries have been reported in connection with the fire.

Dicks Sporting Goods was forced to close Sunday due to the amount of smoke that had entered the store. In addition, Manhattan Fire chief Jerry Snyder is reporting Monday morning significant roof damage at Dick’s. While he did not have a dollar amount, Snyder indicated a six by six foot portion of the roof was burned, with 100 small holes caused by debris. Other buildings in the area are also being checked for roof damage.