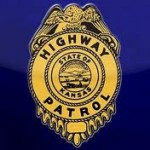 Slick roads led to two injury accidents on K-177 about eight miles south of Manhattan within a couple of hours of each other Monday afternoon.

The first accident was reported shortly before 1:30 when a 2003 Chevrolet Silverado pickup driven by Alan Boerger 71, of Manhattan was exiting I-70 onto K-177 when Boerger lost control on the wet roadway. The truck went into a skid and entered the east ditch, overturning. Boerger was taken to Mercy Regional Health Center where he was treated and released.

Then shortly before three in the afternoon a ’96 jeep S-U-V driven by Maria Manriquez, 40,  of Manhattan was exiting I-70 onto 177. In a nearly identical accident, Manriquez lost control on the wet roadway, went into a skid and  overturned in the east ditch. Manriquez was taken to Mercy Regional.  She was also treated and released. Two occupants in the vehicle were not injured.