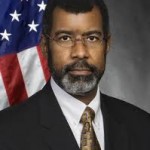 Magwood adds he’s seen a lot of changes in nuclear energy in the nearly two decades he’s actively worked with the Department of Energy. He says the mid-90’s showed little interest in the field.

And Magwood reminds us of Kansas State’s importance with it’s nuclear reactor–that is close to celebrating it’s 50th anniversary. Magwood said he also wanted to visit Kansas State to learn more about it, with a lot of exciting things happening here. He describes K-State’s approach as multi-diciplinary, and praises it’s work with other schools.

Magwood was the longest-serving head of the United States’ civilian nuclear technology program, serving two Presidents and five Secretaries of Energy from 1998 until 2005. Magwood has also served seven years as the Director of Nuclear Energy with the U.S. Department of Energy.