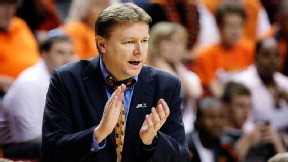 The university said in a news release Friday that the two were on a recruiting trip to Arkansas when the plane crashed near Perryville, about 45 miles west of Little Rock.

The university says the plane’s pilot and another passenger also died in the crash. Their names were not released and OSU said they were not associated with the university.

Ten men associated with the OSU men’s basketball team died in a plane crash in Colorado in January 2001.