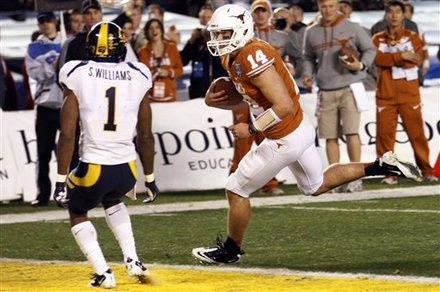 SAN DIEGO (AP)   David Ash threw for one touchdown and caught a TD pass to lead Texas to a 21-10 victory against California in the Holiday Bowl on Wednesday night.  The Longhorns (8-5) had five takeaways and sacked Cal’s Zach Maynard six times.  The Golden Bears (7-6) are winless in five games against the Longhorns dating to 1959.  Ash caught a 4-yard pass from wide receiver Jaxon Shipley in the second quarter to join BYU’s Steve Young, Texas A&M’s Bucky Richardson and Oregon’s Joey Harrington as quarterbacks who’ve caught scoring passes in the Holiday Bowl.  Texas coach Mack Brown joked on Tuesday how much it still bugged him that Harrington caught a TD pass in the Ducks’ 35-30 win against Texas in the 2000 Holiday Bowl.  The Oregon offensive coordinator then was Jeff Tedford, who has been Cal’s coach since 2002.  Harrington now works for the Longhorn Network.