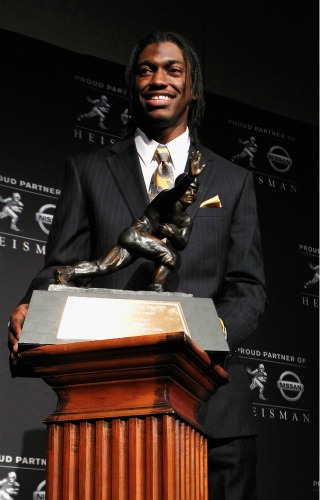 SAN ANTONIO (AP)   Heisman Trophy winner Robert Griffin III is getting help in dealing with his new fame.  The Baylor quarterback confirmed Monday that he’s sometimes shadowed by security since being honored earlier this month as the nation’s best player.  Griffin said he understands that “people are going to want a piece of you when you’re doing great things.”  He added it was a good problem to have and downplayed the new part of his celebrity.

Baylor spokesman Heath Nielsen later clarified that the school isn’t paying for private bodyguards.  He said an athletic department employee follows Griffin in public to minimize demands for autographs and pictures.  Nielsen said the only time he recalled police escorting Griffin was at a home basketball game.

Baylor plays Washington in the Alamo Bowl on Thursday.   The game kicks off at 8:00pm at the Alamo Dome in San Antonio, TX, and will air live on SportsRadio 1350 KMAN.