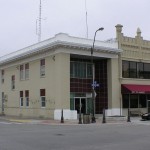 There’s going to be some major expansion in Wamego. At Tuesday’s City Commission meeting, City Manager Merl Page opened with a Public Hearing on Caterpillar Work Tools Tax Abatement request. Caterpillar’s Business Resource Manager, Robert Astolfi was in attendance, and was pleased there was no public opposition. Page said the City staff has gone through the application process and received the cost/benefit analysis from the Department of Commerce, with one standard not met, the cost/benefit for Pottawatomie County. All that’s needed is a legal description of the property. Page asked the Commission to authorize the City Attorney to complete the requirements and forward the application to the Court of Tax Appeals, which is the ultimate authority in this matter.

There was no opposition to the second Public Hearing on the 20-11 budget amendment. The Commission approved the amendment request for an increase of $100,000 for cleaning the burn site location, a $30,000 increase to the Convention and Visitors Bureau, which is a pass-thru from increased bed-tax revenue, and 300-thousand dollar increase for the Westar final settlement. According to Page, these increases are necessary to allow for the needed budget authority transfers. He pointed out this amendment does not affect the mill levy.

Wamego does not have an official ‘No Smoking’ ordinance. At Tuesday’s  Commission meeting,  Page reviewed the earlier request from Steve Ringel, who wanted to paint ‘No Smoking’ on the sidewalk in front of business properties with a 20-foot ban area. The issue was tabled from an earlier meeting, and after reviewing the isse with City staff, the Chamber of Commerce Design Committee and business owners, Page said no one was in favor of the idea at this time. One of the concerns was the conflict of the painting with the current street scape, plus the City does not want to promote an environment of being an unfriendly place to visit. Commissioner Bill Ditto made a motion not to move forward with the idea and it passed 5 to zero. Page thanked Ringel for coming forward with the request.

In other business, the Commission approved two Re-plat Ordinances; approved increasing the City’s employee’s life insurance coverage from 15 to $25,000 with a small monthly cost increase due to a drop in the cost per-thousand of coverage, and approved a resolution on how to handle the City’s payroll by changing the time-frame in order to meet current policy obligations. According to Page, the City and County-Wide sales tax numbers are still positive and things are looking good.