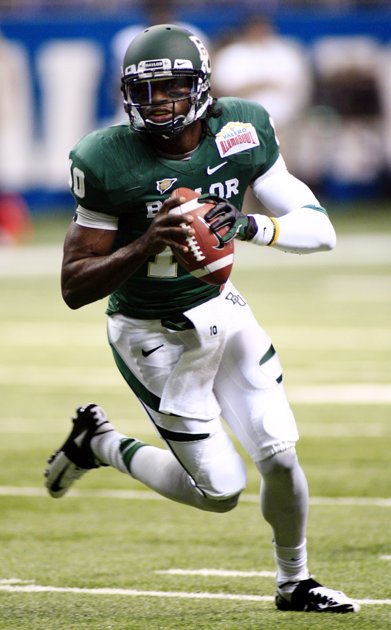 SAN ANTONIO (AP)   Heisman Trophy winner Robert Griffin III didn’t dazzle but Baylor still pulled out a thrilling Alamo Bowl victory in the highest-scoring bowl game in history, beating Washington 67-56 in a record-smashing shootout Thursday night.  If this was RG3’s last showcase before the NFL, it was a gripping goodbye to watch.  One of the nation’s most electrifying players was upstaged by an even more dazzling game that shattering the previous record for points in regulation set in the 2001 GMAC Bowl.  Griffin had an unremarkable night, throwing just one touchdown pass and running for another.  But Terrance Ganaway starred ably in his place, rushing for 200 yards and five touchdowns.  His last was a 43-yard run with 2:28 left to seal the win for No. 15 Baylor (10-3).