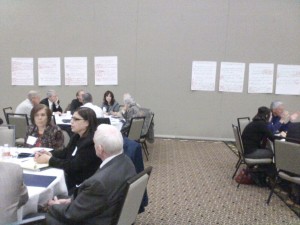 Getting in the trenches, and rolling our sleeves up, were just some of the suggestions at a housing roundtable held at the Manhattan Conference Center Friday morning. Kansas State Professor Dr. Eric Higgins, who is the head of the K-State Department of Finance, was moderator for the event, and reminds us it’s been a decade since such a discussion.

A panel of experts from those many areas were featured, including Manhattan City Manager Ron Fehr. Fehr says as others have developed strategic plans such as Kansas State and Fort Riley, a community vision is important too. Fehr  says this is something the city commission has been wanting to do for some time.

John Armbrust, who serves at the Executive Director of the Governor’s Military Council, described the session as very, very good, and says he was impressed with the panel, which featured, Fehr, and experts in banking, real estate, and building.

One of the attendees, Kip Lee, who is the Manhattan Branch Manager for Housing and Credit Counseling, says he was impressed by the diversity of the turn-out.

All comments were collected, with continued discussion anticipated. One suggestion which met with applause was to include Pottawatomie county more in further considerations.