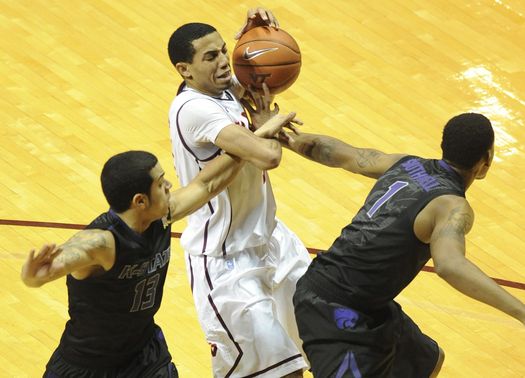 BLACKSBURG, Va. (AP)   Jamar Samuels scored 15 of his 17 points in the second half on Sunday night and Kansas State used a 10-0 second-half run to take command and beat Virginia Tech 69-61.   Samuels also grabbed 14 rebounds for the Wildcats (5-0), who were playing their first road game of the season and first at an ACC school since 1959.  They missed often from in-close early, but attacked the basket in the second half with Samuels getting the first three baskets.  Robert Brown scored 15 points and Erick Green had 14 for Virginia Tech (5-3), but the Hokies got no closer than eight after Kansas State finished its 10-0 run with 5:31 remaining.

The Cats will battle West Virginia and former K-State head Coach Bob Huggins on Thursday night at 8:00pm at InTrust Bank Arena in Wichita.  Coverage begins on SportsRadio 1350 KMAN at 7:00 from the K-State Sports Network.