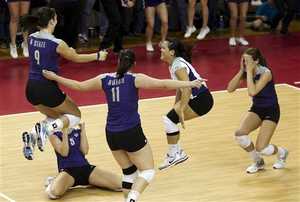 The K-State volleyball team is headed to Hawaii for the Regional Semifinals of the NCAA Tournament and fans are being asked to send the Wildcats off with a cheer.  The team will leave today at 7 p.m. from the Bramlage Coliseum west parking lot, and fans are asked to come to a send off party for the team at 6:45.  The bus will be in the northwest corner near Gate 3.

K-State defeated #2 Nebraska on the Cornhuskers’ home floor in the second round on Friday night to advance to be one of the last 16 teams remaining in the tournament.  The Wildcats take on #15 seed Pepperdine at 9 p.m. CST in Honolulu on Friday.  If K-State can defeat the Waves, the Wildcats will play the winner between #7 Southern Cal and #10 Hawaii for a shot at the Final Four.