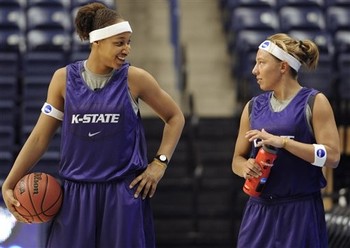 The Wildcats had a 13-point lead over the Iowa Hawkeyes only to see it disappear, but a strong defensive effort in overtime without star player Jalana Childs gave Kansas State the 81-78 victory on Saturday night. Childs fouled out of the game with 2:34 remaining in overtime and the score tied at 76, and her teammates responded and allowed Iowa to only score once the rest of the way for the win.

K-State (4-2) had its opportunities to put the game away but missed four free throws down the stretch. Thanks to solid defense from the Wildcats the missed free throws did not come back to hurt K-State as Iowa (5-3) shot just 2-of-5 in the overtime period.

Brittany Chambers led the Wildcats in scoring with 23 points hitting three shots from long range during the contest. She also pulled down six rebounds, all on the defensive side, to help K-State in transition. Childs posted 20 points on 8-of-12 shooting and was a perfect 4-of-4 at the free-throw line. Branshea Brown led the Wildcats in rebounds with seven. Five of those were offensive rebounds that helped K-State tally 15 second chance points.

Sharp shooting from Iowa’s Jaime Printy and Kalli Hansen is what pulled the Hawkeyes back into the game as Printy posted 21 points and Hansen added 11 – 10 of them in the second half. Wahlin scored 13, and Morgan Johnson had 17 inside for Iowa.

Kansas State will conclude its home non-conference schedule on Wednesday night, as the Wildcats host Wichita State at 7 p.m. Coverage begins at 6:30 on KMAN.