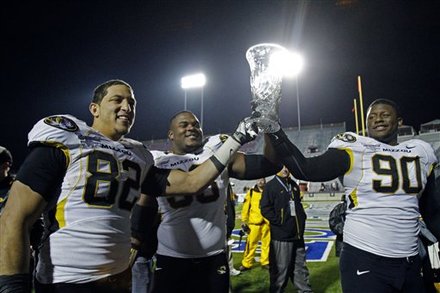 SHREVEPORT, La. (AP)   James Franklin ran for two touchdowns and threw for another, and Missouri easily beat North Carolina 41-24 in the Independence Bowl on Monday night.  Franklin rushed for 142 yards and threw for 132, leading Missouri to an Independence Bowl-record 31 first-half points. Kendial Lawrence added 108 rushing yards for the Tigers, who gained 337 yards on the ground.

Missouri (8-5) won its final football game as a member of the Big 12, finishing the season on a four-game winning streak for the first time since 1965. The Tigers will join the Southeastern Conference next season.

North Carolina (7-6) fell in interim coach Everett Withers’ final game on the sideline. The Tar Heels lost five of their final seven after starting the season with a 5-1 record.  Bryn Renner threw for 317 yards, three touchdowns and an interception for UNC.