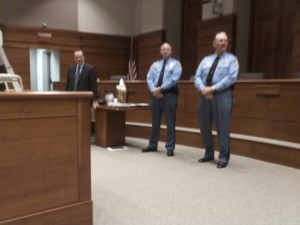 On Friday  Riley County Police Captain Gary Grubbs and Detective Alan Riniker were given a retirement reception at City  Hall.

Both men are heading into retirement from the force, taking with them together totaling 78 years of experience.

Director Brad Schoen described it as a sense of family, and praised the devotion and dedication of the two men who he says will be missed.

Grubbs says those who showed up for the reception were like brothers and sisters. He says every day he’s gotten up and come to work it didn’t feel like he was coming to work. He added you can’t ask for any better community than Riley County.

Riniker says it’s been a great career and always different–never the same day when you walk in the door.