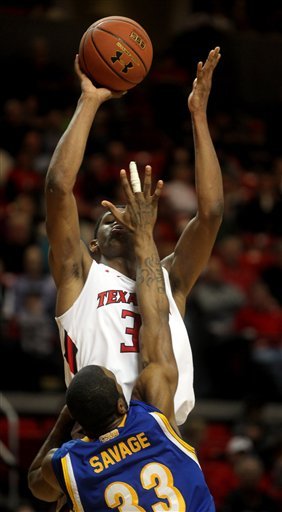 LUBBOCK, Texas (AP)   Jordan Tolbert scored 27 points, all from the paint and free-throw line, to lead Texas Tech past Cal State Bakersfield 74-58 on Tuesday night.  Tolbert, a freshman, has scored at least 20 points in his last four games, and this one matched his highest point total of the season.

With Texas Tech leading 55-50, Cal State Bakersfield’s Donald Johnson was called for a technical foul after he appeared to taunt after a breakaway dunk. The Red Raiders (6-5) converted the resulting free throws and possession, and finished the game on a 19-8 run.  Bakersfield (6-7) crept within six, but Terran Petteway’s 3-pointer with 5:28 left took the air out of the visiting Roadrunners.  Stephon Carter led the Roadrunners with 17 points.  Bean Willis scored 16 for the Red Raiders, and Robert Lewandowski tallied 10 points.