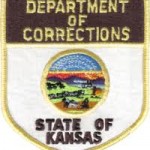 Three people convicted in Riley county on murder charges are up for possible parole in the next few months.

Following the public comment sessions, parole hearings will be conducted in February, with the earliest release date of March of 2012.