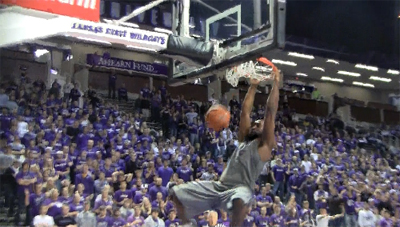 Click here for full video recap including highlights and postgame interviews from TheGamedayNetwork.com

It certainly wasn’t pretty, but the Cats did score the win on Sunday in OT over North Florida 79-68. It was the second straight over-time game for K-State, but while the game against West Virginia felt like a tournament atmosphere, this game was the total opposite. The Wildcat’s halftime lead turned into a 9 point deficit following a 24-8 run by North Florida. The Cats eventually battled back to take the lead only to have UNF’s Jimmy Williams force OT at the buzzer. The OT period was all K-State and the Cats move to 6-1 on the season. K-State was again led in scoring by freshman forward Thomas Gipson who powered his way to a career high 23 points and 12 rebounds. Highlights, postgame interviews with Coach Martin and the players, and more in our post-game wrap up video.