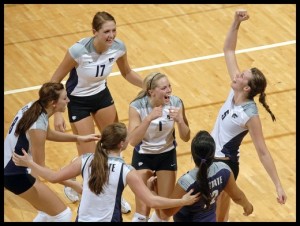 LINCOLN, Neb. – In the Kansas State Wildcats’ return to the NCAA Tournament, the middle blockers took control at the net as Kaitlynn Pelger and Alex Muff led the team in a sweep over Wichita State in the first round. Pelger posted her 13th double-double on the year leading the team in kills and digs while Muff posted her third match of the season with double-digit kills. The Wildcats got the sweep 25-18, 25-22, 25-17 to advance to the second round on Friday night in NU Coliseum.

“At different times each one of our middles have stepped up this season,” Head Coach Suzie Fritz said. “Pelger is an all-conference selection and has been a significant part of our offense.Alex Muff is our defensive specialist of the two. She does things at the net that we have never had a middle do.”

Pelger had a slow start to the match with just two kills in the first set, but Muff compensated on offense this time for the Wildcats as she tallied six kills in the opening frame. Pelger responded with six in the second set and then carried the team in the third set with seven to bring her total to 15. Pelger also was solid on the back row with 17 digs to lead the way. Muff finished the match with 10 kills and three blocks to go with her .412 hitting percentage.

After her first NCAA Tournament match, Pelger said she was nervous going into it, but she added that she was able to settle down and play well and enjoy the moment.

“I think personally for me in my first NCAA Tournament I didn’t know what to expect,” Pelger said. “I just had to realize it was just another match. We’re one of 64 teams out of 300-something that still gets to play.”

K-State (21-10) limited Wichita State (21-11) to a team hitting percentage of just .119 compared to the Wildcats’ .268. The Shockers’ star player Camri Zwiesler was also limited to just nine kills and a hitting percentage of .121 as the Wildcats were able to slow her down. No players for Wichita State reached double digits in kills. Defensively, libero Sarah Waldorf shined for the Shockers as she tallied an impressive 22 digs on the night in the loss.

Defensively for the Wildcats, the effort was spread around as Pelger led with 17 digs. She was joined in double digits by libero Kuulei Kabalis with 14, and defensive specialist Tristan McCarty continued her strong play of late with 12 digs herself.Kathleen Ludwig added nine digs and four block assists. Setter Caitlyn Donahue had another strong match with 46 assists and seven digs.

The Wildcats and Shockers traded blows for the first half of the opening stanza, but the Wildcats found their offense thanks to Muff and stormed away after the set was tied at 12 points apiece. K-State would go on a 7-0 run with three kills and a block from Muff during the stretch. The getaway would continue after the Shockers scored two quick points only to see the Wildcats score three straight with another block and kill by Muff to go ahead 22-14. The Wildcats kept pushing Wichita State into the corner to eventually get the win 25-18 and take the first set for the 1-0 advantage.

Muff said it was good for the Wildcats to find a way to pull away from the Shockers in the first set and establish the tone for the match after the team struggled out of the gates at times this season.

“It was super important for us as a team to win the first set like that,” Muff said. “We’ve struggled to come out and play our best volleyball early. We relaxed and knew what we had to do.”

In the second set, it was Lilla Porubek who came up with the kills after remaining silent the entire first frame. Porubek pounded out six kills en route to a 25-22 win in the second and go ahead 2-0 at the intermission. Pelger also found her stroke with six kills in the set to bring her match total to eight through two sets.

Defensively, the Wildcats again limited Wichita State to a team hitting percentage under .100 in the second set as the Wildcats posted 26 digs in that set alone thanks to the efforts of McCarty and Kabalis. K-State entered the contest averaging 14.90 digs per set on the season, and posted 15 in the first set putting the Wildcats on pace for their season average until the defensive explosion in the second set. For the match, K-State posted 65 digs, which is a new season-high for a three-set match.

In the third set, the Wildcats pulled away midway through similar to the first. With the match tied at 9-9, K-State would go on a 5-1 run to take a four-point advantage. From there it was all Wildcats. Another 5-0 run would put it out of reach as K-State led 23-15, and then Pelger teamed up with Courtney Traxson for back-to-back kills and the win 25-17.

Fritz said she is glad to be advancing to the second round and stay alive in the tournament after missing out on the postseason the last two years. She knows her team has exceeded some expectations, and the Wildcats will now turn their focus to the next match.

“We just work one at a time. We’ve been that way all year,” Fritz said. “I’ll be frank and say that nobody thought we were going to be any good this year, and we found a way to win matches. We had every intention of playing our best volleyball in December and we’re going to try to do that again tomorrow.”

K-State will take on the winner of Jackson State and former conference rival Nebraska at 7 p.m. Friday from the Coliseum. The match will be televised locally on NET in Nebraska and available for free online at www.huskers.com. The radio call from 1350 KMAN also is available online at www.kstatesports.com if fans cannot listen on the radio.