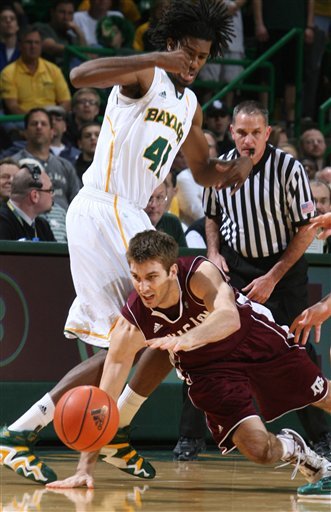 WACO, Texas (AP)   Perry Jones III had 14 points with 12 rebounds and fourth-ranked Baylor remained undefeated with a 61-52 victory over Texas A&M in the Big 12 opener for both teams Monday night.  The Bears (14-0) have started the season with the first 14-game winning streak in school history.  Baylor led throughout after scoring the game’s first eight points, and led by as many as 19 points in the second half.  Elston Turner had 21 points for Texas A&M (9-4), which has lost three of its last four games.  Khris Middleton had 14 points.  Part of the Bears’ opening 8-0 run was Pierre Jackson’s half-court alley-oop pass to Jones for a slam dunk.  Baylor pushed its lead to 28-11 with a 18-4 run that Jones started with a turnaround 15-footer and ended with a long jumper.  Turner’s 3-pointer got the Aggies within 10 with 5 minutes left before they had consecutive turnovers.