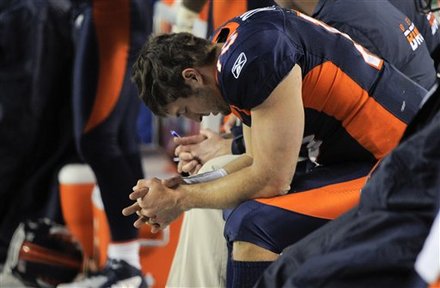 DENVER (AP)   Tim Tebow fell short in his latest comeback bid, yet his Denver Broncos are still going to the playoffs.  Former Bronco Kyle Orton got his revenge in leading the Kansas City Chiefs to a 7-3 win over Denver on Sunday, but it’s the Broncos who clinched the AFC West and is headed to the postseason.  After congratulating their former starting quarterback, the Broncos celebrated the end to their six-year playoff drought once San Diego beat Oakland 38-26 later Sunday.  Losers of their last three games, the Broncos finished 8-8, same as the Raiders. They win their first division title since 2005 on a tiebreaker.