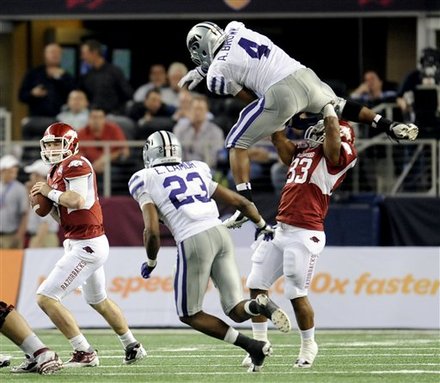 All-SEC quarterback Tyler Wilson was well short of the record passing performance he had earlier this season at Cowboys Stadium, but did throw two touchdown passes after Adams’ fourth punt return for a TD and the Razorbacks beat No. 11 Kansas State 29-16 in the Cotton Bowl on Friday night.

The Razorbacks (11-2) matched a school record with their 11th victory. Their only losses were to No. 1 LSU and No. 2 Alabama, their SEC West rivals who will play for the BCS national championship Monday night.

“Joe Adams has made big plays for us all year long,” Wilson said. “We were struggling offensively until he sparked us. Great players make big plays, and he definitely got his.”

Adams’ 51-yard return early in the second quarter gave the Razorbacks a 10-0 lead before they even gained a first down. It was the first punt return for a touchdown in the Cotton Bowl in 51 years.

“It was another one of those where you just go, Wow!” coach Bobby Petrino said. “You could see when he made the catch he had in mind what he was going to do. We got some good blocks. … Joe showed great acceleration, made another spectacular play for us.”

Adams matched the SEC single-season record with his four punt return TDs. The senior receiver, who had five catches for only 22 yards Friday, was the only FBS player this season with multiple punt returns for TDs, along with rushing and receiving scores.

“It obviously made a major difference,” Kansas State coach Bill Snyder said. “We knew he’s a talented player. We knew that he could make you miss him. …. The players were probably tired of me talking about being able to contain Joe Adams and not let him bounce the ball outside. Sure enough he bounced it outside.”

The last punt return for a touchdown in the Cotton Bowl also was by a Razorback, when Lance Alworth had a 49-yard return in a 7-6 loss to Duke in the 1961 game.

The only other 11-win seasons for the Razorbacks were by the Lou Holtz-coached team in 1977 and coach Frank Broyles’ only undefeated season at Arkansas in 1964. They won 10 games last season with a Sugar Bowl appearance.

“To get this program consistently in the top 10, in BCS bowl games, great bowl games like the Cotton Bowl, hopefully in the top five in the country with 11 wins, it means so much to me personally, and to this group of seniors,” defensive end Jake Bequette said. “It’s just been such a fun ride.”

A member of that 1964 team that won the Cotton Bowl over Nebraska was Jerry Jones, the Dallas Cowboys owner who attended the game in his $1.2 billion stadium that opened in 2009. He was part of a loud crowd of 80,956.

Kansas State also was trying to match its school record with 11 victories, but still finished a surprising season in Snyder’s second Wildcats turnaround. K-State won 11 games six times during a seven-year span in Snyder’s first tenure before his three-year retirement, and almost reached that mark again in his third season back.

Wildcats quarterback Collin Klein tied the Big 12 record with his 27th rushing touchdown this season and matched the FBS record for quarterbacks.

After being held to 15 yards on 12 carries in the first half, Klein finished the opening drive of the third quarter with a 6-yard TD run that got the Wildcats to 19-16. That came after Klein had a 15-yard run on the previous play.

The Razorbacks played their second game at Cowboys Stadium this season, three months after they overcame an 18-point halftime deficit to beat Big 12 team and future SEC foe Texas A&M 42-38.

In the return trip, Arkansas led the Big 12 opponent at halftime and had mostly throttled Klein and the Kansas State offense. It was the first game for new Razorbacks defensive coordinator Paul Haynes, who was hired in December after Willy Robinson resigned.

Wilson, who threw for a school-record 510 yards in that Oct. 1 game at Cowboys Stadium, was 20 of 31 for 216 yards against Kansas State. Jarius Wright, who had 13 catches for a record 287 yards against the Aggies, and three catches for 88 yards and a 45-yard TD in the Cotton Bowl.

The Cotton Bowl was the only non-BCS game with both teams in the top 15 of the Bowl Championship Series standings—Arkansas came in sixth, Kansas State eighth. It also is the only bowl featuring the SEC vs. the Big 12, the top two conferences in the BCS computer rankings.

The Razorbacks didn’t even get a first down until 12 1/2 minutes left in the first half when Dennis Johnson opened a drive with a 28-yard run. That drive ended with the second of Zach Hocker’s three field goals, a 22-yarder.

Arkansas led 19-0 when Wilson threw a 45-yard TD pass to Jarius Wright with 4 minutes left in the first half.

Kansas State, which has lost its last four bowl games since beating Arizona State in the 2002 Holiday Bowl, blocked the extra point and Nigel Malone returned it for two points.

It was 19-9 at halftime after Klein threw a 3-yard TD pass to Andrew McDonald with 26 seconds left in the first half. That score was set up after Wilson was sacked by Adam Davis and fumbled at the Razorbacks 13.

Wildcats defensive end Meshak Williams was injured at the end of the first half, when he made helmet-to-helmet contact with Emmanuel Lamur when both were trying to tackle Wilson, who put his head down to avoid the hit.

Williams remained down on the field for several minutes being tended to by medical personnel and then placed on a stretcher. He gave a thumbs-up signal when being placed on a cart, then when he was being driving off the field extended his right arm high and flashed a Wildcat sign.

Kansas State officials said after the game that Williams had already been released from the hospital and was going back to the hotel to join the team. They said he was moving all extremities and doing OK.

Tenarius Wright, the Razorbacks’ other defensive end, jumped over a pile to recover the loose ball at the Kansas State 13.

Klein’s fumble came on a second-and-33 play after a sequence that started with his 20-yard run to inside Arkansas territory being wiped out by an illegal shift penalty. He was sacked on the next play before a holding call and a false start pushed the ball all the way back to the 20.

“We got off to an awfully bad start and really couldn’t overcome the damage that we did,” Snyder said. “And most of it was pretty obvious.”