It was a festive day at the Manhattan Town Center, with the celebration of Dr. Martin Luther King Jr. day in full swing. One of the highlights of the day was a quilt put together by Ronna Tyson, a former art teacher at Manhattan high school. Tyson says it took 550 hours to put the quilt together, with many of those going back and re-doing things. Tyson, who has worked with MLK committee chair Jim Spencer for a number of years, says quilting isn’t new to her–but this project was different. Tyson says the technique is described as snippets.

In addition to several people recognized for their essays and art work, former Manhattan-Ogden teacher and administrator Ivory Anderson was recognized during the noon hour as this year’s recipient of the “Spirit of Martin Luther King Community Service Award.” Anderson also was inducted into the Kansas Teacher’s hall of fame, and coached girl’s softball. Anderson had high praise for others as he accepted the award, including the Martin Luther King Jr. committee and members of his family.

Many at the event indicated it was the biggest turnout ever for the annual celebration, which ended in cake at the end.

While pleased with Monday’s celebration, local Martin Luther King Jr. day committee chair Jim Spencer had one suggestion in regard to the event, and that was to celebrate all year long.

Several awards were presented and a variety of singing and dancing were provided for the day-long event. 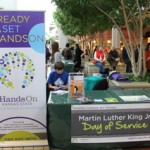