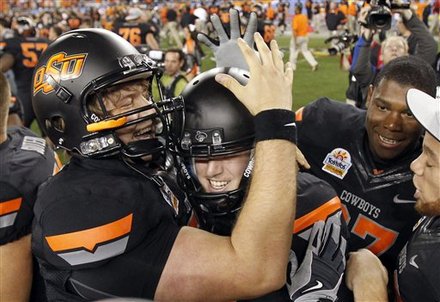 GLENDALE, Ariz. (AP)   Brandon Weeden threw for 399 yards and three touchdowns to Justin Blackmon in his final collegiate game, and Quinn Sharp hit a 22-yard field goal in overtime to give No. 3 Oklahoma State a 41-38 win over Andrew Luck and No. 4 Stanford in a wildly entertaining Fiesta Bowl on Monday night.  The most anticipated postseason game outside of the BCS championship, the Fiesta Bowl was an impressive offensive show, two of the nation’s best teams trading big plays and scores.  Oklahoma State (12-1) had the last one on Sharp’s game-winner to win in its first BCS bowl game, earning a chance to stake claim at being #1 in The Associated Press poll should Alabama beat LSU in the BCS title game.  Stanford (11-2) had a chance to win in regulation, but redshirt freshman Jordan Williamson hooked a 35-yard field goal wide left as time expired.  He also missed from 43 yards in overtime.