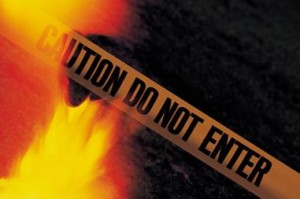 The danger of an electrical fire grows during the winter months, causing millions of dollars in damage and causing chaos for those whose lives it touches.

“A lot of that occurs because of misue of heating equipment and things of that sort,” Ward said.

“If there is frayed wiring,” he says. “If the insulation on the wiring has become cracked because it’s gotten brittle, or if it’s gotten run through. Occasionally, people will run wiring, especially extension cords, in locations where it might get walked on.”

Children are another factor in some electrical based fires. According to Ward, they may knock over items such as a space heater and he recommends purchasing one with an automatic shutoff if it becomes too hot. Some other tips to help prevent electrical fires include: using safety closures to “child proof” electrical outlets and keep clothes, curtains and other potentially combustible items at least three feet from all heaters.