The sentencing phase of the trial of Luis Aguirre continued on Tuesday in Riley County District court.  Aguirre has been convicted of murdering his ex-girlfriend Tanya Maldonado, and their 13-month-old son Juan in October of 2009.

During the hearing defense attorney continued to bring forward witnesses who testified on the hardships of Aguirre’s past.  In the morning Aguirre’s sister testified on the severe beatings Aguirre would receive from his mother, and how he was her protector as they were frequently moved from place to place.

Next in a series of videotaped interviews the family of another ex-girlfriend of Aguirre, Nicole Calhoun, testified that Aguirre supported Calhoun as she gave birth to his daughter and later a son.  The family told jurors that Aguirre is an integral part of the children’s lives, and wish to see him live.

Aguirre’s high school teacher was called to the stand in the latter part of the morning.  Davis testified that she thought of Aguirre as a skilled and creative writer who was an example for her other male students to open up in their writing.

The next witness was an investigator for the defense who testified on the security present at the high school due to extreme amounts of gang violence, and tension.  The investigator stated that one of the security guards told him he thought Aguirre was quiet and nonviolent, and could name 500 other students he would have thought would have committed the murders before Aguirre.

The last witness for the day was the father of Aguirre’s little sister.  He reinforced the tough living conditions in which Aguirre grew up, and apologized in court to Aguirre for his actions. 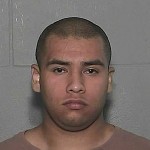