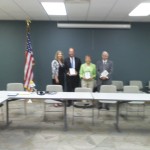 Three area legislators received recognition Tuesday from a group calling itself “Economic Lifelines” for their support of transportation legislation described as pro-jobs. The group’s Chief Executive Julie Lorenz talked about the importance of transportation programs in creating jobs and economic value.

The event was held at the Manhattan Area Chamber of Commerce office, with President and CEO Lyle Butler expressing appreciation to the legislators.

State Representative Carlin admitted the role has been a difficult one, with many wanting to take money from the transportation budget for other things. State Senator  Reitz thanked the group for the award, focusing on the work being done on K-18 and at the Manhattan regional airport. Senator Longbine  was also appreciative of the recognition.

Plaques were presented to each of the three area legislators.