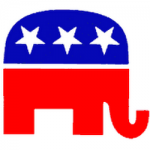 Prominent American business man Herman Cain gave a lecture Tuesday evening, in the Ballroom of the K-state Student Union. As a candidate for the 2012 Republican Party presidential nomination, his status as a front runner would mark the first time ever, that a minority candidate lead national polls in a Republican Presidential Primary.

Cain earned a master’s degree from Purdue University. At various points, he worked for the Department of the Navy, the Coca-Cola Company, Pillsbury, and would be appointed CEO of Godfather’s Pizza.

Cain, said that despite the struggles we face today, the American Dream is alive. He made sure to thank his parents, saying that they were hard-working, and strived to provide him the best live they could.

Herman Cain continues to host his own radio show and supports conservative principles, especially when it comes to the economic and government budget issues from the perspective of a successful CEO.

The event was co-sponsored by the Diversity Program Committee and Young America’s Foundation.