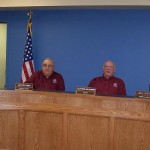 Several loose ends were tied up in Wamego at Tuesday’s City Commission meeting. City Manager Merl Page presented several resolutions for approval. The first has been out there for a while, regarding tangible gifts and memorials donated to the City by the public. The resolution’s purpose is to avoid misunderstandings regarding ownership and care of any donation to the City.

The Commissioner’s approved a resolution allowing individual property owners to retire their special assessments. This issue was discussed at an earlier meeting, and the Governing Body had no problem with the repayment as long as Bond Counsel agreed. The property owner is still liable for the full amount of principal and interest due on the assessment. To do this, the property owner needs to submit a written request with the City Clerk. Both resolutions were adopted.

According to Page, the City recently received the resolution draft from Bond Counsel authorizing the sale of $1.1 million in Revenue Bonds for power plant improvements.

Meanwhile cities and other public entities change banks on a regular basis.  City Manager Page said the city used to alternate banks every two years when there were just two banks in town, but there have been several new banks added. He said they seek proposals based on interest rates for idle funds, and accepted the proposal from Kaw Valley Bank for a two year period beginning January 2013.

In other business, the Commission accepted the bid from Tri-City Fence Company for fencing around the Wastewater Treatment Plant. Page said the need to clean out and replace the fence has been kicked around by the City staff for a while, and he felt it was time to address the issue and seek proposals.

In the project review, Director of Operations Mac Campbell said the existing projects were all on target, with Julie Drive due to be completed by mid-December, just in time for Christmas.