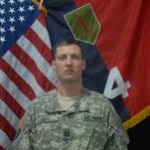 Nehl joined the Army in 2007 and arrived at Fort Riley in May. This was his first deployment to Afghanistan. He also previously deployed to Iraq in support of Operation Iraqi Freedom.