The hopes of an undefeated season and likely a shot at the BCS National Championship for the Kansas State Wildcats evaporated into the Texas sky as the Baylor Bears used a relentless offensive attack and took advantage of Wildcat mistakes as Baylor pulled away in the third quarter for a 52-24 victory before 38,029 Saturday Night at Floyd Casey Stadium in Waco. 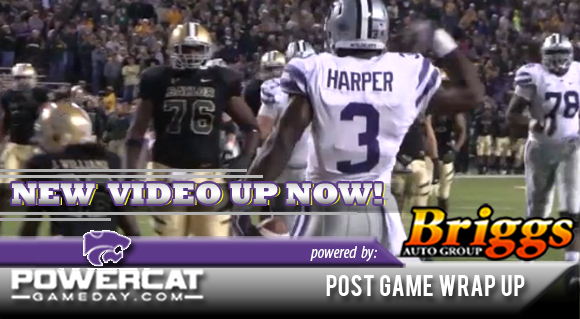 Tailback Lache Seastrunk rushed for 183 yards including 80 on a long touchdown run after K-State Quarterback Collin Klein’s third interception of the night late in the third quarter to salt the game away.

The Wildcats and Bears traded touchdowns on their opening drives before Baylor regained the lead for good on a 12-yard run by Quarterback Nick Florence who also threw for 238 yards and two touchdowns on the night. Baylor led 28-7 with less than two minutes to go before halftime but a Klein touchdown pass to Wide Receiver Chris Harper and a Field Goal by Kicker Anthony Cantele narrowed the defecit to 28-17 at intermission. Starting the second half with possession of the ball, the Wildcats had a chance to further cut into the deficit but Klein was intercepted at midfield and Baylor scored a touchdown just a few plays later and eventually pulled way for the win.

With the loss, K-State now likely will not have a shot at playing in the BCS National Championship but still has a chance to win a share of the Big 12 title and the league’s automatic bid to the BCS if they can beat Texas on December 1 at Bill Snyder Family Stadium. The Cats nearly backed into the championship on Saturday night but Oklahoma scored a touchdown in the final 25 seconds to edge West Virginia in Morgantown 50-49.

PLAYER GRADES: Wildcats bounce back with win over TCU