Talk has been going on about a bridge that connects the two counties of Pottawatomie and Wabaunsee.  Now the two commissions are moving forward together to make some decisions.

Nealson suggested using a polyester polymer concrete.  After discussion and comments from those who were there, both commissions decided to check out and see which option would have the most “bang for the buck”.  No other decision was decided as more data will need to be collected.

The Pottawatomie County commission also had their usual weekly meeting filled with updates from the justice center and talks with departments for their monthly numbers.

Two bids were also opened for the new EMS building in Westmoreland.  After closer examination of the information, a recommendation will be brought back before the commission.

The commission was also able to recognize Robert Reece, County Administrator, on an award he was given by the Kansas Association of Counties.  A $1,000 scholarship was also donated to the county. 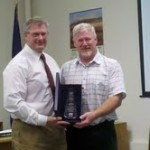