Angel Rodriguez scored 19 points and hit four three-pointers as K-State beat Lamar 79-55 in the opening round of the Preseason NIT on Monday night at Bramlage Coliseum.  The Cats forced 14 Cardinal turnovers en route to a 43-15 lead at halftime.  K-State subbed liberally in the second half as they cruised to the victory.  Will Spradling added 14 points for K-State (2-0), while Jordan Henriquez blocked six shots.  Henriquez and DJ Johnson led the Cats with eight rebounds apiece.  Lamar (0-1) was led by 17 points from Donley Minor. 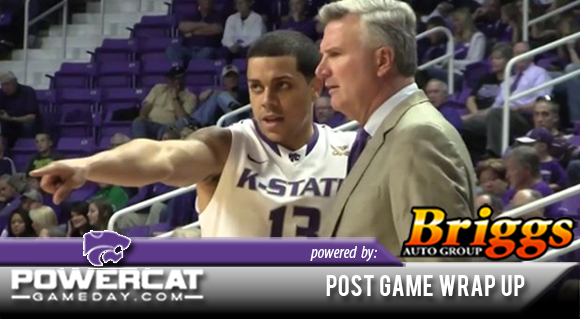 K-State will face Alabama-Huntsville in the second round of the preseason NIT on Tuesday night at 9:00pm.  The game will be televised nationally by ESPN2, as the winner will get a berth in the preseason NIT semifinals and a trip to Madison Square Garden in New York City.  The pregame from the K-State Sports Network begins at 8:00 on SportsRadio 1350 KMAN and 101.5 K-Rock.

For full video wrap-ups, including analysis, highlights, coaches & player interviews of K-State Football & Basketball check out PowerCatGameday.com
*** Get Updates and Alerts on all things KSU on your phone! text powercat to 88474