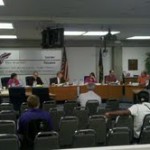 There was some cheer and emotion at Wednesday night’s Manhattan Ogden school board meeting as some discussion came of the Friday shooting in Newtown, Connecticut and the issue of safety in schools.

Superintendent Bob Shannon went over a number of changes that the district has seen over the last few years because of the bond issue, including the ability to secure classrooms from inside.

Though this made some a little choked up, not all of the meeting was unhappy.

A part of the Manhattan High school choir showed up to do a little caroling.

There were actual items on the agenda as four main topics were addressed.

Beginning the night was the presentation on the elementary school schedule.

Some discussion came over the use of half days and early release to include collaboration time for teachers, but no decision has been made.  This will be brought back next year for a public hearing before the board makes any decision.

The board also approved to allow about 25 Chinese students to come to the states for about three weeks as part of a cultural immersion program.

There was also a presentation over the possibility of an increase in attendance over the years for the district.

Associate Superintendent Bob Seymour talked about the projection that is expected from those attending classes from first grade until seniors in high school.

Though, some were skeptical of the information as there hasn’t been any actual indication of a rapid increase.  Others saw the news as something to be pleased with as it means growth for the community.

The last issue that was discussed concerned the sequestration.  After originally being brought up last meeting to begin thinking if an opposition would be made the board voted with a 6-1 vote, with board member Walt Pesaresi dissenting.

The next board meeting will be on January 9.