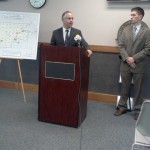 Congressman Tim Huelskamp arrived in Manhattan Friday morning to make a very important announcement at the Manhattan Regional Airport. He started off by stressing the importance of January 3, 2013; first saying that that would be the day that the K-State football team would win the fiesta bow and second, that he would be sworn in for his second term as a U.S. Congressman on that day. This would also be when Manhattan and Pottawatomie county would officially become a part of the first congressional district.

Huelskamp was also happy to announce that his staff would be opening a new sattelite office in the Manhattan area to better serve the constituents of this area. He believes that this office “will be the first ever, or at least the first ever in memory that we will have a congressional office in Manhattan Kansas”. He stated that he wanted to be in every community in the district as much as he was able to.

Huelskamp finished the annoucment by saying that he was a stickler on spending, and that last year, his office put $143,000 from their budget back into the national treasury, and he says that while he plans on doing the same this year, he will not do so at the expense of the people that he serves.