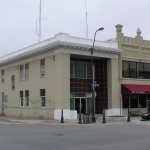 In other business, City Manager Merl Page announced receiving a challenge from the City Council of Creswell, Oregon, on the outcome of the Fiesta Bowl. Whichever state’s team loses, the city officials have to wear the winning team’s hat. It was not disclosed what the hats will look like, but Wamego accepted the challenge.

The Commissioner’s gave their blessing to Boy Scout Troop 75’s request to hold a Frisbie golf tournament in Pennyland Park in May, as a fundraiser for the Troop.

Wamego tied up some loose ends that effects City staff. City Manager Page introduced a resolution to establish the option for Direct Deposit for the employees compensation. Page said this change requires amending the personnel policy in the event of termination. He pointed out that Direct Deposit is an option, and if the employee chooses to waive the option, their paychecks will still be mailed.

In other business, Page said the City has been administering the Flex-Spending account in-house. However, a recommendation to consider out-sourcing the administration of the un-reimbursed medical expenses and dependent care was considered, and the City has contracted with Wage Works to administer the Flex-Spending piece. Both of these changes will go into effect in January 2013.

Wamego’s first meeting of 2013 is changed. Page wanted to remind the public that the regular meeting is always the first Tuesday, which would be New Year’s Day, so this meeting will be held on Wednesday, January 2nd at 6 p.m.

The final meeting of 2012 closed with the Commissioner’s wishing everyone a Very Merry Christmas and a Prosperous New Year.