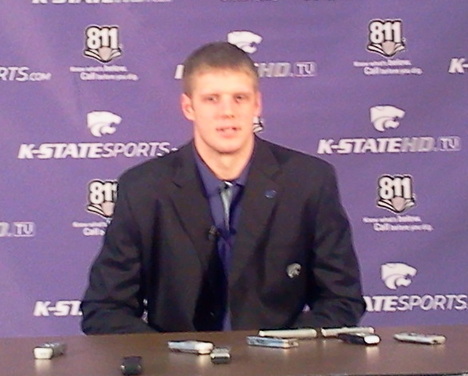 K-State quarterback Collin Klein appeared at a press conference on Tuesday afternoon to discuss the college football awards season.  Klein will appear at the ESPN Home Depot Football Awards on Thursday in Orlando, where he is a finalist for the Maxwell Award (to nation’s top player) and the Davey O’ Brien Award (to nation’s best quarterback).  He will then go to Baltimore, MD on Friday to accept the Johnny Unitas Golden Arm Award, which he was announced as the winner on Monday.  Klein will then go up the east coast as one of three Heisman Trophy finalists on Saturday at the Downtown Athletic Club in New York City.