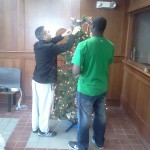 The Manhattan city hall has a new Christmas tree to greet visitors entering the building.  Mayor Loren Pepperd says that the city purchased the tree at last week’s festival of trees presented by RSVP of the Flint Hills. The tree purchased was one that benefited the USO of Fort Riley. The money from the tree as well as the gifts under it, all went to support the USO. In return, the USO, along with some soldiers from Fort Riley and their spouses came out to city hall on Saturday to help decorate the tree.

The theme of the tree, says Pepperd, is meant to reflect the positive support between the city and Fort Riley. The tree will be topped with an American eagle, and will have red, white, and blue ribbons, ornaments, and other such trimmings.

The USO received things such as a new microwave, which helps in their mission to provide whatever support is needed to soldiers all over the country.