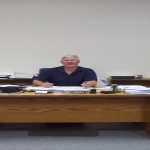 Though they were one commissioner down, as Gary Yenzer, commission chair was not available, there were still a number of items to take care of on the agenda Monday.

Trisha Brooke-Fruent, construction manager for SMH Consultants, talked to the commissioners that even though the masonry company is no longer on the project, things are looking to be on schedule.

Brooke-Fruent has requested an updated schedule to bring to the commission at a future meeting.

There was also some discussion over the overall appearance of the construction site, as all agreed things could be a little more organized, clean and safer at the site.

News of the recent fires in St. Mary’s was also brought before the commission as Bruce Brazzle, fire supervisor, said they are continuing to follow leads and investigate the incidences that occurred over the Thanksgiving holiday.

Lois Schlegel, the county appraiser, brought before the commission a recent audit that was done in accordance with some possible figures if a tax exemption for trade fixtures were to go into affect.

Schlegel said it could “cost the county millions of dollars” if passed in the upcoming legislative session.

Due to the Christmas holiday next week, the next Pottawatomie County Commission meeting will be held on Monday, December 31.