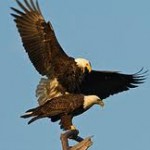 The U.S. Army Corp of Engineers held it’s annual eagle day event Saturday at the Manhattan Fire Station located at 2000 Denison Ave. Over one hundred people attended the event, which was split into two different parts. During the first part, those in attendance were treated to a presentation on bald eagles and their nesting habits by Dan Mulhern, who is a biologist with the U.S. Fish and Wildlife Service. Following that presentation, Director of the Milford Nature Center Pat Silovsky talked about eagles and other birds of prey, bringing with her several live birds to show off, including a red tailed hawk, a falcon, and several owls.

After the presentations , participants were bused to Tuttle Creek Lake, where they were given a tour by the members of the Northern Flint Hills Audubon Society, with the hopes of seeing bald eagles nesting in the wild.

The event was free and open to the public.