On Saturday  Kansas State University  campus was bustling with activity as kids from all over the great plains gathered for the final stage of the 2013 Future City Competition in Rathbone Hall.

The competition was held in five parts including an essay portion, design, a narrative describing the city, and the final presentation before a panel of experts.

Assistant Dean for the Kansas State College of Engineering Tom Roberts says the event is a great opportunity for young folks to engage in engineering, and was impressed with the presentations.

This year’s competition was based on storm water and pollution control, and participants designed a future city to solve the engineering topic.  Students used components of the video game SimCity 04 to research and test their solutions.  A model is constructed using less than $100 dollars as one of the final projects.   The finalist for this year’s event gave a presentation to the entire gathering at Forum Hall to conclude this portion of the competition.

The competition is broken down into 36 regions, and each region sends a finalist to the Crystal City Virginia in February  to compete for the national grand prize.  The first place winner in this year’s event will be going to Space Camp in Huntsville, Alabama.  Second and third place winners receive $5,000, and $3,000 from event sponsors. 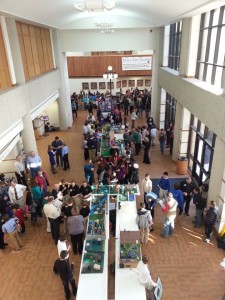