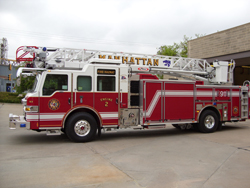 A possible arson may be to blame for two vehicle fires during Friday’s early morning hours.

The Manhattan Fire Department responded to a call at the 600 block of Yuma of a vehicle on fire.

Upon arrival, the crews found two vehicles were on fire.

The investigation is still ongoing and there is consideration of a possible arson.

An early morning fire here in Manhattan has left damage to a carport and a duplex.

The Manhattan Fire Department responded to a call in the 1200 block of Ratone at about 7, Friday morning.

Upon arrival, the crews found the carport fully involved in fires and extending to a single story duplex.

Crews did extinguish the fires.

The investigation is still ongoing and there has not been a set dollar amount determined at this point.