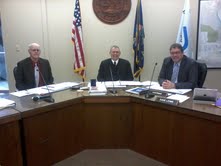 After being sworn in, the next item of business was to reorganize the board of county commissioners.  During this time, Commissioner Dave Lewis became the new chairman.

All of the bids were approved to move forward for staff evaluation and recommendation.

County Treasurer, Elieen King took the time to remind everyone of a new law for permanent trailer plates, during the press conference.  As of January 1st, permanent trailer plates are available for purchase.  A $10 one time registration fee will be charged for trailers used with vehicles registered for a gross weight of 54,000+ pounds.

These plates are mainly for commercial businesses that have large fleets.  If a trailer gets a premanent plate, it can’t go back to a regular trailer, and the plates are not transferable.  If the trailer is currently assigned a standard plate, it will need to be returned to the county and exchanged for a permanent plate.

County Counselor, Clancy Holeman brought forward the resolution establishing the Riley County cost per acre of soil erosion inspection.  Holeman explained, if counties don’t set their own costs, the standard rate is three dollars per acre, which does not begin to cover the costs of the land and reimburse the county.

After hearing the details of the resolution, the commission unanimously approved it.

Wamego man injured after rolling vehicle on I-70