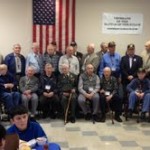 On Saturday January 12th, the North East  Kansas Chapter of the “Veterans of the Battle of the Battle of the Bulge” celebrated the 68th anniversary of the end of the epic World War II battle named “The Battle of the Bulge”. Nicknamed “Hitler’s Last Stand”, it was the largest land battle for the United States Army throughout WWII. The battle began on the morning of December 16th, 1944. German troops surprised the un-expecting American Troops along the Ardennes between Belgium and Luxembourg. With the freedom of Europe at risk, over one million soldiers battled for 43 days through one of the coldest Belgian winters to date, leaving many soldiers to suffer from frostbite and trench-foot. More than 200,000 casualties were suffered on both sides, including many civilians in Belgium and Luxembourg. The battle came to an end on January 27, 1945 when American troops were able to push back German Forces back into Germany.

The fourth annual celebration of the battle took place at the American Legion, Pearce Keller, KS Post 17 in Manhattan. Over twenty Battle of the Bulge Veterans and thirty WWII Veterans were in attendance. Many shared stories of the battle, along with other memories of the war. Along with a Luncheon, all in attendance were able to visit an Artifact room which contained pictures and clothing from the battle. Regarding the veterans, President of the North East Chapter, Tad Pritchett, mentioned “… Most of them don’t think they have done anything out of the ordinary and are, generally, very humble about their experiences, so an event like this leaves a great impression on them.”