K-State coach Bill Snyder is one of five finalists for the Bobby Bowden National Collegiate Coach of the Year Award.  Voting by the National Sportscasters and Sportswriters Association will start after the BCS title game on Monday night. 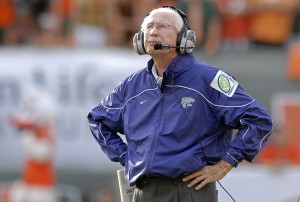 Bowden will present the award to the winner on March 3rd in Birmingham, AL.  A lifetime acheivement award will also be handed out.