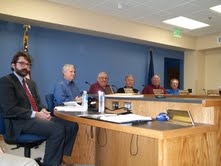 Wamego’s first meeting of the New Year was one of the shortest.  At Wednesday’s City Commission meeting, City Manager Merl Page announced the City tries to do a three-year rotation of Police vehicles, and sent out a request for proposal in December.  With only one proposal being received, the recommendation to purchase a 2012 Dodge Charger with the patrol package,  for the net cost after trade-in of over $22,000.   Page said they will trade a 2005 Crown Victoria currently used for Code Enforcement and rotate in a 2009 Crown Victoria.  The Commission approved the purchase.

In other business, the City’s 2013 Pay Plan review was tabled until all the Commissioners were in attendance.  Page said that the City went to a merit-based pay plan several years ago, but scaled it back during the recession of 2009.  He said everything was back to normal in 2012, and the recommendation for 2013 is a three percent salary adjustment for those that qualify under the merit system.  Mayor Pro-Tem Robert Morse made the recommendation to table the issue for two weeks.

Wamego’s Flood Plain maps are finalized. City Manager Merl Page said both the City and the Planning Commission approved the recommended changes to the new FEMA Flood Plain Maps and an ordinance was necessary.  A motion was made and approved to adopt the ordinance.

In other business, the sales tax numbers are in,  and Page reported the County-wide is up one-half (1/2) percent for the full year, with the City-wide up six point two percent over the same time last year.

In addition, Page declared January 3, PURPLE  THURSDAY,  and is asking everyone to wear Purple to support the home team in Thursdays game against the Oregon Ducks.  If you recall, a challenge was issued by the Creswell, Oregon City Council that the loser in this game has to wear the opposing teams caps at their next meeting.  Both Mayor Bill Ditto and Commissioner Vic Enns will be in attendance at this game.