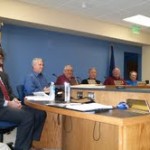 · Evaluating competiveness on a general basis and adhering to the merit-based system, and

· Consideration of this year’s budget.

In other business, the Commission approved the GAAP Waiver (Generally Accepted Accounting Principals) which allows the city to continue operating financially on a cash basis. This resolution is required annually.

Jim Meinhardt and Nick Novelly approached the Commission with a proposal for assistance in the parking lot owned by Meinhardt , located between the Friendly Cooker and the Reese and Novelly offices. According to Meinhardt, the lot is privately owned but used to capacity by the public on a regular basis. In addition to the taxes being over $1,000, maintenance during ice and snow and liability insurance are concerns. Meinhardt feels like it’s time for the City to own the lot.

Mayor Bill Ditto said the lot could be donated to the City, with the cost to operate and the taxes becoming the responsibility of the City. Meinhardt countered by saying the use of the lot has been donated for the past 20 years, and he isn’t interested in making another donation.

After several suggestions that included rental or lease purchase, the Commission agreed to consider the proposal and come back in 30 days with an answer.

Page said he’d received the proposal from Ottaway Amusement’s for the Carnival during Wamego’s 4th of July activities. The Carnival will operate in downtown Wamego beginning June 30th through July 4th. The agreement was signed.

In other business, the Commission made their normal donation to the annual Diamonds & Denim fundraiser, which benefits the Wamego City Hospital Foundation. There was some question on the number of Pool Parties donated, but they agreed to do the same as last year.

The Commission approved a request by Don and Ronna Robertson of Manhattan to block off parking in the City Park for a Car Club, involving 20 to 25 vintage cars, so the participants could attend some of Wamego’s local events. Wamego is the Car Club’s destination location.