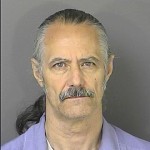 An inmate serving time on Geary county convictions of attempted first degree murder, aggravated kidnapping, and aggravated sodomy is eligible for parole in the near future.  Tabor Adkins, 65,  was convicted in the 1983 cases and has been in jail ever since.

As KMAN news told you at the time Adkins was up for parole in September of 2009, but parole was denied at that time.

The actual parole hearing will be in April, with the earliest possible release in May.